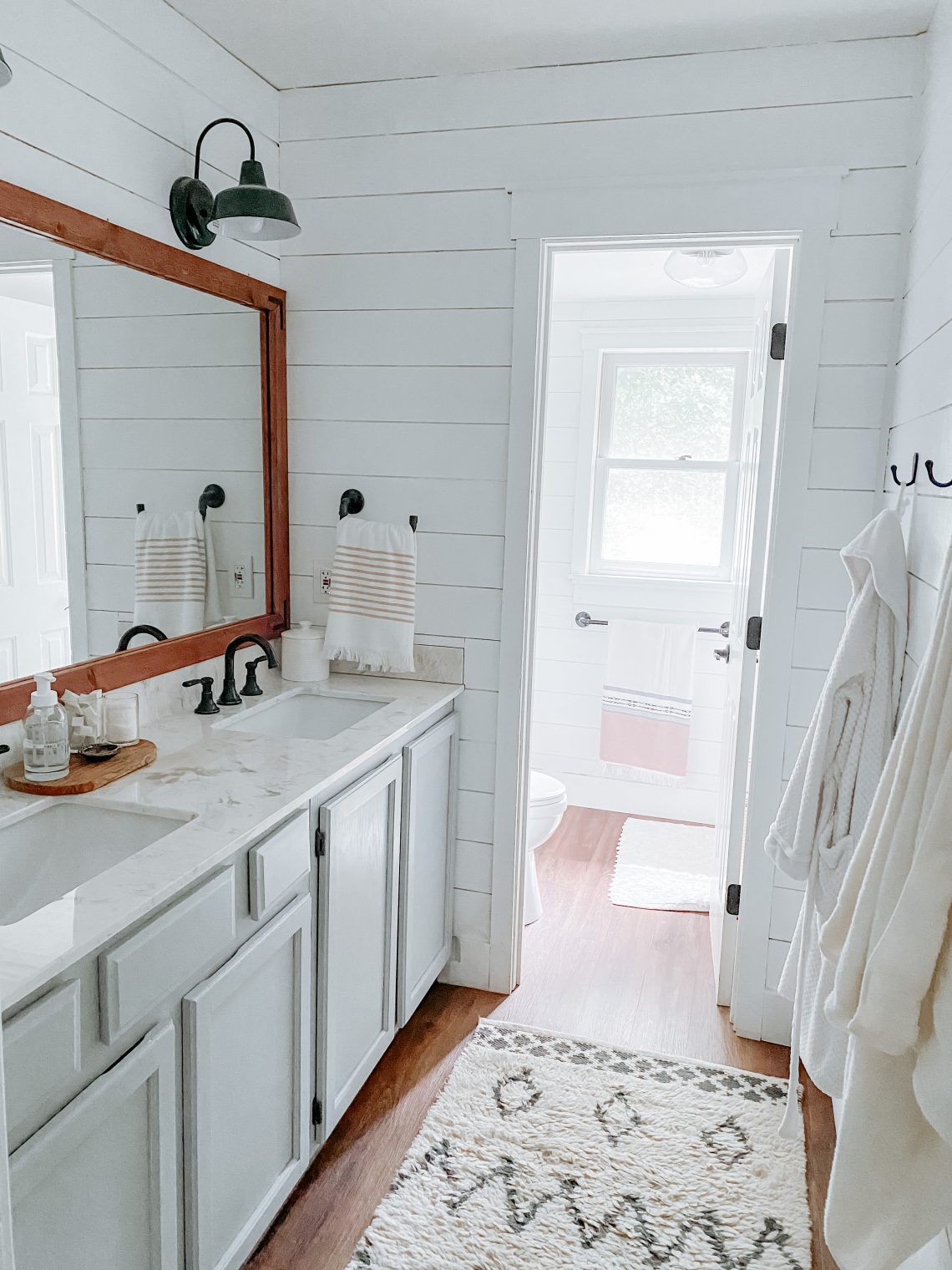 CHECK OUT THE BEFORE AND AFTER OF THIS RENOVATED SPACE, 2 YEARS IN THE MAKING

This bathroom reveal has been a long time coming! This is the upstairs bathroom that we started renovating right when Taylor and I started dating. His sister was moving in soon and the bathroom was super dated so he wanted to update it for her. This bathroom ended up being a lot slower of a process than planned

As you can see in the before images, this bathroom is a decent size but only has one sink. So the first thing we did was order a countertop with 2 sinks. I already knew the fixtures absolutely had to go so I started looking for a good deal on 2 faucets and other hardware.

Taylor ended up ordering a standard size from Lowe’s. Unfortunately, the standard size is 1” too long for our space. Taylor invested in a fancy stone cutting blade for his angle grinder and we were able to fix it by cutting ½” off each side to make sure the center stayed in the center.

To update the cabinets without replacing them, I opted to paint them. I thought the grey would play nicely with the colors from the stone. Oftentimes, people just paint the cabinet doors and the outside of the cabinet fronts. We painted the inside as well because there had been some water damage and it just looked gross! The paint made a huge difference!

I love the look of shiplap and I managed to convince Taylor that we should do the whole bathroom, but we couldn’t afford to use the premade/pre-primed stuff. We liked the idea of doing the shiplap in a way that was more ‘authentic’. I’m rolling my eyes because it sounded like a cool idea at first but man it was a lot of work.

In order to get ‘authentic’ shiplap, we bought plywood sheets and ripped them into individual boards. We didn’t actually have the tools to do this but we knew someone who did and for a pack of beer, we got to make all the pieces in their woodshop! We cut the slats down with a table saw and we used a dado blade to make the tongue and groove parts.

The downside to doing this, in my opinion, was that the plywood edges didn’t leave clean reveals. Even painted, the imperfections were super obvious.

There is a fine line between a space having ‘character’ and a space looking poorly made. I like the aesthetic of smoother shiplap but that was hard to get with this plywood shiplap. I ended up trying to fill some knots and smooth the surfaces as much as I could but there was only so much I could do.

We installed the shiplap and used the airless paint sprayer to prime the shiplap. I wish I had just primed them first. It was hard for me to get paint into some of the reveals and we had to go back and re-paint a lot anyways. The whole process of taping everything off was super time-consuming. I think the paint sprayer is great for covering large spaces but it was just bulky for these smaller spaces.

This was also the first time we framed out doors and windows and man it’s harder work than we thought it would be!

This bathroom was definitely a test area for us. We got to try to renovate a space that we will rarely use. The majority of the rooms are downstairs and the two bedrooms and one bathroom upstairs. They would be completely unused if it weren’t for occasionally having roommates.

The finishing touches for the space are the pop of color in the green barn lights over the vanity and the mirror frame I made! You can check out the post for how to make this mirror here. The barn light is one of my favorite parts of the space and you can find something similar here.

Our shower room light was an attempt to have a fun light without making it feel like a heavy object was hanging above your head. We chose a glass dome, and honestly, it gets SO dusty. It’s definitely a cute look but keep dust in mind when you’re selecting light fixtures.

So although this is the bathroom reveal, which is exciting, I always want to be honest with you. I have NOT finished this room.

I need to add some baseboard trim to the linen closet and we need to caulk like crazy! Now the white caulk we started using is not quite as white as the paint we chose for the walls. At some point soon, I will make a post for you all about caulk; what each type means, how to apply it, when to use it, etc.

Architect turned DIYer. Wanting things I can't afford and attempting to build them myself. I’ll figure out what doesn’t work so you can jump right in and join me on this DIY adventure. I want to inspire pinners to be skilled craftswomen and to motivate the procrastinators (like myself) to not settle just because of a high price tag. I’ll walk you through it, just takes some elbow grease.

I love fire, in a totally reasonable, not crazy wa

THE COUNTDOWN BEGINS!! 🎄 I'm in love with how

My gallery wall is up! Last year I wrapped my gal

Did you really make a thanksgiving dish 🥧 if yo

If you don't shove your face into a fresh Christma

We are not hosting Thanksgiving this year so my @k

This house has changed so much since I've moved in

Last shot of the new home library before I start a